by Craig Mayhew on Mon 25th Apr 2011 under General
I've installed the release candidate and had a play with the new media on a prim feature. At the moment it's only supported by the Second Life viewer. So, even though the OpenSim server supports it, none of the open source viewers do. I'm very impressed with it although I quickly hit limitations as you can see in the image. 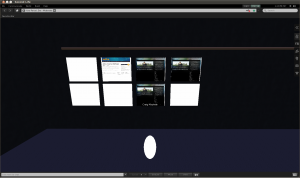 You may immediately notice that may avatar refused to render at all in the second life viewer. It does render fine in other viewers so I'm not yet sure what the reason was for this. That aside, the media on a prim feature was limited to 4 prims. Any more than that and they just appeared white. The closer I got to the prims, the less problems I had and clicking on a prim would force it to display at the expense of another previously working prim.

I'm not sure what causes this limitation, it may be hard coded into the second life viewer or may be something that can be modified via settings, but despite looking I haven't yet been able to get it to display a whole wall of media enabled prims.

More on this soon!

OpenSim   Media on a Prim